The Institute for Research on Race & Public Policy at the University of Illinois at Chicago (UIC) promotes and coordinates engaged research on racial and ethnic justice in the U.S. Our mission is to increase society’s understanding of the root causes of racial and ethnic inequality and to provide the public, organizers, practitioners, and policymakers with research-based policy solutions. To fulfill that mission, IRRPP funds research on race and ethnicity, trains scholars to participate in policy discussions, collaborates on social justice projects with community organizations, and holds events exploring the link between policy and racial and ethnic injustice.

In the 1990s, the African American and Latino communities at UIC engaged in multiple initiatives to improve the presence of people of color and representation of their issues throughout the campus, its programs and curricula. As part of this, they asked the University to support the establishment of Institutes carrying out engaged research on the conditions and experiences of their own people, with a particular emphasis on policy and community. In response, UIC created a task force of African American, Latino and Asian American faculty to draft a proposal. The Task Force proposed the creation of an Institute within UIC that would facilitate policy relevant research on (and primarily by minority faculty) race/ethnicity, racism and public policy. The Institute would also assist with recruitment and development of faculty and students of color, and develop partnerships around policies and initiatives of advancement for communities of color. This was later reinforced by partnerships between UIC and surrounding underrepresented communities and leaders of color around their advancement and the development of programs and policies with an impact on such communities throughout the city, the metropolitan area and the State of Illinois.

Under the leadership of Dr. Philip Bowman, IRRPP received permanent certification as a University Institute in October of 1994. Today, IRRPP is organized around a set of strategic priorities that combine policy-relevant scholarship with assistance in the development, recruitment and retention of underrepresented faculty and students, maintaining close cooperation with and ownership of the Institute by the underrepresented community on campus, and providing services to the UIC campus, the City and Metropolitan Area of Chicago, and the underrepresented communities in general. 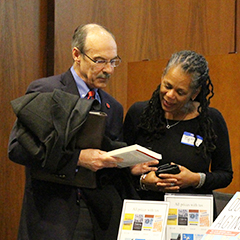 The Institute for Research on Race and Public Policy is a campus-wide, cross-disciplinary research, policy and practice unit governed by an Administrative Council and advised by an Executive Board. We are housed in the College of Urban Planning and Public Affairs , which provides administrative support for the Institute.

Our By-Laws are available to download as a PDF.