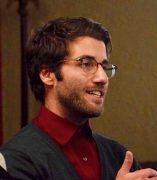 Chris Poulos is interested in the central role of financial markets, institutions and their intermediaries in contemporary urban political-economy. As municipal governments have turned to financialization as a means of expanding urbanization and competing on a global scale, the pecuniary logic of finance has generated a full spectrum restructuring of state institutions, from the provision of public services to the reconfiguring of revenue streams. He researches the complexity and power of financialization and the interaction effects between the growing pools of global capital seeking profitable investment opportunities, revenue starved state institutions (federal, state and local) and the machination of key local actors. He is committed to public sociology as an avenue to engage with policy-makers, community-based organizations and activist communities committed to social change and sees the primary role of urban sociologists as translating the sometimes complex data, trends, and social, political and economic phenomena of cities into a digestible and practical set of recommendations. He received his B.A. in Sociology from Northeastern Illinois University, and his M.A. in Urban Planning and Policy and Ph.D. in Sociology from the University of Illinois at Chicago.